After a long (and soon to be forcibly resumed) absence due to house renovations I have decided to break my silence with a small announcement.

There are those of us out there who simply cannot put down stuff to do with the Spanish Civil War. I am one of those people. For me the SCW represents the last European conflict with really flamboyant uniforms. A conflict that was not quite WW1 (if only because the Spanish proved themselves woefully resistant to digging proper trenches!) and yet not quite WW2 either. A conflict waged with colonial warfare savagery by the nationalists and by jingoist communist propaganda by the republicans. A war where mild steel was bolted together over cars and called tanks (well, actually they were called Sooty's [Tiznao's] but you get what I mean) and where the division between socialist ideology and fascist ideology is almost like holding up a mirror to the politics of today.

Now, I haven't actually painted anywhere near my complete collection for this stuff BUT it is something that will feature in a big way in the coming couple of years or so.

Because of the obscurity of some of the things that were used in this war, and the paucity of manufacturers supporting these needs in 1/100 (a.k.a. Gods One True Scale!), I have found myself having to go the extra mile for some of the things that I want for the Spain in Flames English version I am setting myself the task of writing in the coming days.

Other than Lluis and Minairons in Spain, and the newly resurfaced No Pasaran! range at QH Miniatures, Martin at Peter Pig is the only credible supplier of SCW stuff in the UK and following Martins willingness to sculpt the Slovak heads that saw such prolific use in my Slovakian army I was lucky enough to meet Martin at Aldersley Wargames Show earlier this month and chew the fat with him for a bit.

One area that his Republican, and more pointedly his Republican Basques (or Euzkadi's) are noticeably deficient are in the area of the iconic Dinamitero. I suggested to Martin that a small range of these would almost certainly find their way into peoples armies and that nobody else was doing them to which he suggested I come up with some sketches. We spoke about other stuff as well (more on these at another time maybe) but especially where the Dinamiteros are concerned he said that if I provided said sketches he would get straight to work sculpting them.

I thought you guys would  like to have a preview of what I knocked up for him.

These are the sketches I sent to him, to which Martin duly responded with a confirmation that they are suitable and that he is busy sculpting them already...

Anyway I just thought you guys would like to take a peek at what I sketched and perhaps what the final sculpts will look like:

So, the famed dinamiteros had a brief history dating back to the Asturian miners strikes of 1934 where the mining industry laid down its tools and to which the newly invested left wing government called in Colonel Francisco Franco to suppress it... this he did with some unbelievable savagery using the Spanish Foreign Legion against their own countrymen for the first, but by no means the last, time.

Just as in the miners strikes of '34 when the civil war broke out in '36 the Republic, the Catalans and the Basques were all short of arms as the Nationalists had managed to swipe most of them and maintain control of the areas where the country's main arms depots were located.

Because of this paucity of arms the decision was made to form small cadres of troops who would become proficient with the sling, which they would use to hurl locally manufactured explosives... termed somewhat loosely 'grenades'. They were actually just tins packed with explosives with a fuse...

These guys quickly gained somewhat of a swashbuckling reputation, appearing to know no fear... and lets be honest; swinging those things around above your head with a homemade fuse we can well believe that these guys never went to school and learnt how to recognise danger!

It would seem that dinamiteros were principally from Asturia alongside the Basque territories and as such they were often to be seen fighting alongside the Euzkadi armed forces whom they were sent to assist. It would seem also that there were dinamiteros present with the Durruti Column of Buenaventura Durruti formed in Barcelona, fought a bit around Saragossa before heading south to the defence of Madrid so we know that dinamiteros were present in the Catalan forces as well. I can't find any reference to them being present in any other forces from further south such as Valencia, Madrid or Malaga. Jose Bueno made an image of a Dinamitero in the Communist 5th Regiment but it would seem that this was a mistaken deduction of an old photo.

One thing that is noticeable about the militia columns of the early days of the Republic before they all got militarised and amalgamated into a conventional field army in April 1937 was the lack of conventional uniforms. Blue overalls took a prominent place due to the availability but especially with the Asturian miners there was no such thing as an orthodox look. They wore normal clothes with the variety of looks and styles that this entailed.

There were certain areas that there were commonalities though and this was mainly in headwear and field webbing.

Where the headwear is concerned I have seen two common types of headwear in the photographs of dinamiteros and that is the ubiquitous basque beret and the pasamontana mountain cap. I've sketched all of mine with berets because I believe that the berets are the easiest to clip off and do a head replacement for the pasamontanas if necessary.

The next and perhaps most iconic item that the dinamiteros carried was the white canvas pouches that the local explosives would be carried in. Each of these packs would fit onto the belt and have pouches for three explosives and would be worn one on the left and one on the right of the belt buckle. The true lunatic fringe could/would also carry a third pack on their backs over their kidneys for a total of nine 'home made bombs'!!! Seriously? WTF?!?!?! 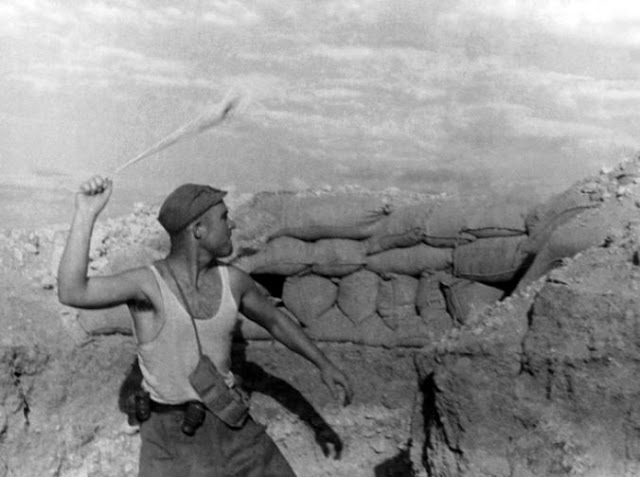 The webbing itself would be a very simple affair with a rugged thick leather belt akin to the US Sam Browne belt and either a 'Y' yolk or crossed belts over the shoulders.

One commonly carried item was a sling belt with multiple pouches on. I would jump at the conclusion that these pouches on the diagonally slung belts were used to carry rifle ammunition BUT the damning thing is that I have not seen a single picture of a dinamitero with any firearms with the exception of a single slinger with a pistol and holster.

Everything else would be the normal mix of clothing and footwear...

All of this is obviously a work in progress and if anybody out there can shed a light on their organisation and/or deployments it would be a great help!
Posted by L. Sabia Byrne at 00:44